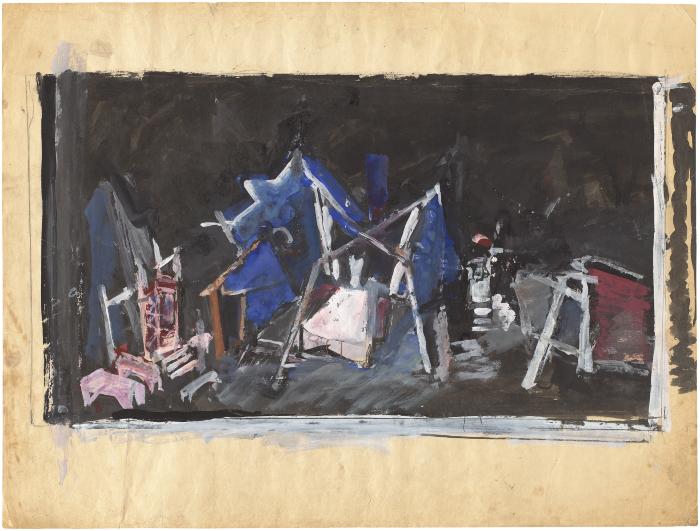 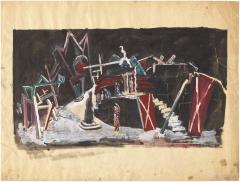 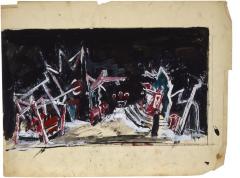 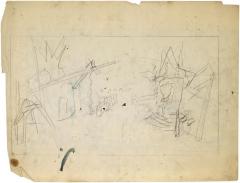 Rothko’s acquaintance Henry Berman recalled that in the mid- or late-1930s Rothko entered a contest to design the backdrop for an opera based on the play The Dybbuk scheduled for production by the Metropolitan Opera in New York City. Remembering the project years later, Berman likened Rothko’s design to a mosaic—yellow-green and divided into small sections—painted on a  30 x 20-inch canvas [Henry Berman, interviewed by James Breslin, February 14, 1986, James E. B. Breslin Research Archive on Mark Rothko, 2003.M.23, The Getty Research Institute, Los Angeles, CA]. While not precisely matching Berman’s description, this and similar works possibly relate to the Metropolitan Opera’s call for set designs (see Related Works on Paper).

The score and libretto of The Dybbuk was composed by David and Alex Tamkin, brothers from Portland, Oregon. The play itself, by Shloyme Zanvl Rappoport writing under the pseudonym S. Ansky, is about the possession of a young woman by a malicious spirit. Submitted to the Metropolitan Opera in 1933, the project languished until 1939, when director Edward Johnson auditioned the work. Despite favorable reviews by New York theater critics, it was ultimately canceled due to both lack of funding and the Met’s cessation of new productions as the United States prepared to enter World War II [Margaret Thompson, “Genius Blossoms in City of Roses,” Sunday Oregonian, March 20, 1949, 6].

The opera was eventually produced by the New York City Opera in October 1951, following the performance of excerpts by the Portland [Oregon] Symphony in February 1949. Rothko’s friend Louis Kaufman, who was also friends with David Tamkin, recalled that Rothko worked on stage designs and costumes for The Dybbuk, but that Tamkin couldn’t afford them [Louis Kaufman, interviewed by James Breslin, November 3, 1986, James E. B. Breslin Research Archive on Mark Rothko, 2003.M.23, The Getty Research Institute, Los Angeles, CA]. Kaufman believed Rothko’s work on the stage designs took place in 1949–1950, although he may have conflated the dates of the later production with the earlier competition. The notices for the opera’s premiere on October 4, 1951, list Mstislav Dobujinsky as the set designer, with costumes by Ruth Morley. We know that in the late 1930s Rothko submitted to several design competitions. Therefore, if the current drawing relates to The Dybbuk, it seems more likely that it dates from the competition prior to the opera’s cancellation in 1939 than to its eventual production in 1951.