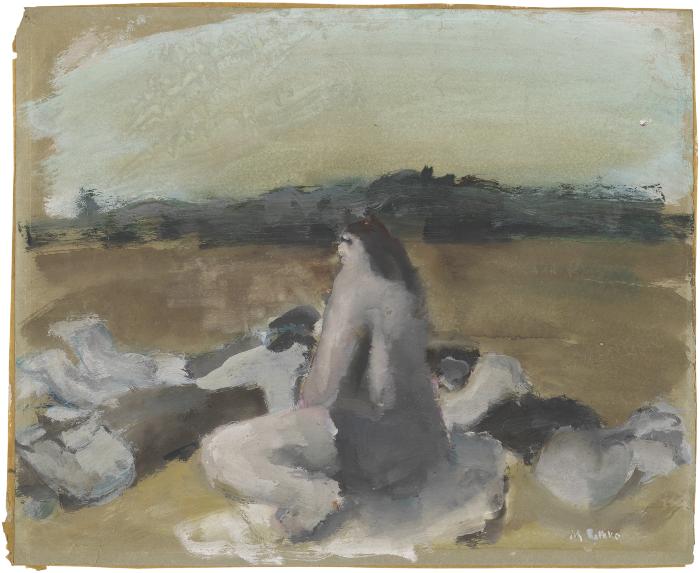 This watercolor of four bathers on the beach was almost certainly painted in Gloucester, Massachusetts, during the summer of 1934 when Rothko and his wife Edith Sachar (1912–1981) vacationed there with the Averys—Milton (1885–1965), Sally, and March—and Esther and Adolph Gottlieb (1903–1974). The Rothkos arrived before the Gottliebs and rented the house on Calder Street that the Gottliebs had wanted [postcard, Adolph Gottlieb to Paul Bodin from 5 Calder St. / E. Gloucester / MA, July 6, 1934, The Adolph and Esther Gottlieb Foundation]. Edith remembered that “we’d meet on the beach every day and go swimming and play handball and we had a lot of good, nice, wholesome times”; in the evenings, they would talk about painting, or “have sketch classes at night at someone’s studio, down in Gloucester, down on the dock there” [Edith (Sachar) Carson, interviewed by Walter Hopps, October 19, 1976, Archives of American Art, Smithsonian Institution]. Gottlieb recalled that he and Avery would “go out and make sketches of Gloucester Harbor or people on the beach . . . and then go home and paint them” [Miriam Roberts, Adolph Gottlieb (Omaha, NE, 1980), 8].

A painting by Avery made in Gloucester in the summer of 1934 includes Rothko (fig. 1); according to Sally Avery, the painting depicts Rothko with Edith and Sally (in the hat) on Good Harbor Beach, Gloucester, not Coney Island, as titled by the Portland Art Museum [Sally Avery to Ruth H. Cloudman, curator, Portland Art Museum, February 6, 1985, curatorial files, Portland Art Museum]. The Bathers is signed and shows evidence of having previously been overmatted; thus it may have been exhibited in Rothko’s lifetime, possibly in The Eighth Biennial Exhibition of Water Colors, Pastels and Drawings by American and Foreign Artists at the Brooklyn Museum in February 1935, which included a work by “Marcus Rothkowitz” titled Bathers. The signature in the lower right appears to have originally read “M Rothkowitz” before being partly effaced to read “M Rothko,” most likely after 1940, when the artist began using a truncated version of his given surname. The inscription on the back also includes “M Rothko” and a price tag of $100, which would have been unusually high in 1934, suggesting that Rothko may have tried to sell this work after 1940, without luck, as it remained in his possession at his death. The 1968/1969 inventory of works erroneously signifies a creation date of 1925–1927. This watercolor relates to contemporaneous figural groups of semiclad or nude females that Rothko painted on canvas (figs. 2–4). 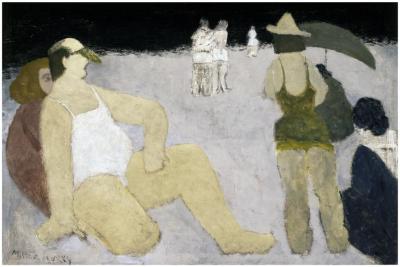 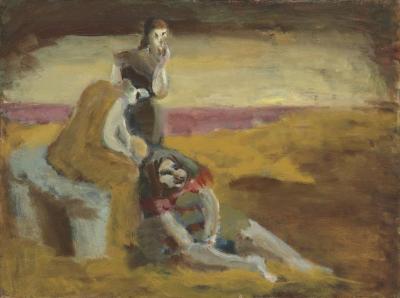 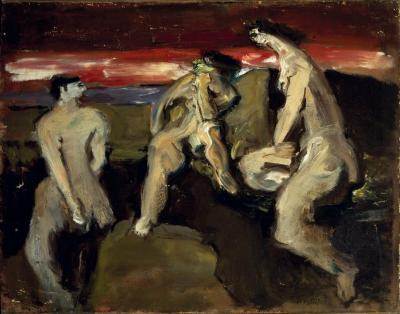 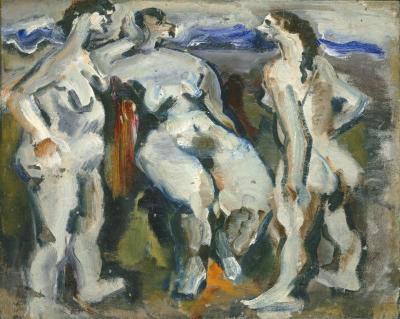