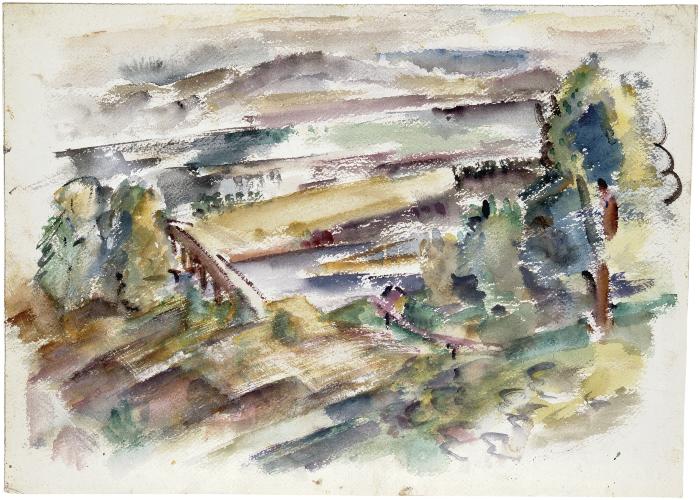 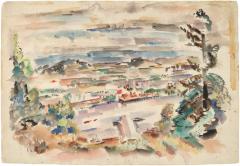 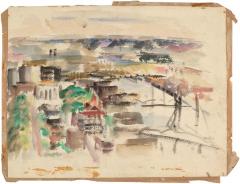 During the summer of 1933 Rothko and Edith Sachar (1912–1981), who married in November 1932, hitchhiked from New York to Portland, Oregon, to visit Rothko’s mother [Maurice Roth, oral history interview, September 15, 1984, Archives of American Art, Smithsonian Institution, Washington, DC]. This watercolor was likely made at that time, when Rothko and Edith camped in Forest Park in the Tualatin Mountains west of downtown Portland. Rothko produced numerous watercolors there, including this elevated western view of the Willamette River and the valley beyond (see Related Works on Paper). During a later visit to Portland, in 1955, Rothko mentioned to an interviewer that his favorite view in the city was from Terwilliger Boulevard, a scenic parkway planned in 1903 by John Olmsted and Frederick Law Olmsted, Jr., that winds along the hills west of the city near Forest Park. It is possible that Terwilliger Boulevard provided Rothko’s vantage point for this watercolor. The cantilevered truss bridge in the middle ground is likely the Ross Island Bridge, which opened in 1926 (fig. 1).

Unsigned and without evidence of overmatting or light exposure, this work was not likely exhibited during Rothko’s life. It does jibe, though, with a critic’s description of works that were shown in a summer 1933 exhibition at the Museum of Art in Portland: “The water colors are chiefly landscapes and studies of forests in which the artist has sought to retain the effect of complexity one finds in the out-of-doors and to show its ultimate order and beauty. A hint of his admiration for Cézanne is in these water colors. They are carefully thought out and in no way theatrical or dramatic” [Catherine Jones, “Noted One-Man Show / Artist One-Time Portland Resident,” Sunday Oregonian, July 30, 1933, 5]. Traces of graphite lines along the top, left, and right edges of the sheet that pass over watercolor paint suggest that Rothko trimmed the paper after completing the work. The number assigned during Rothko’s inventory of 1968/1969 erroneously signifies a creation date of 1925–1927 for this work. 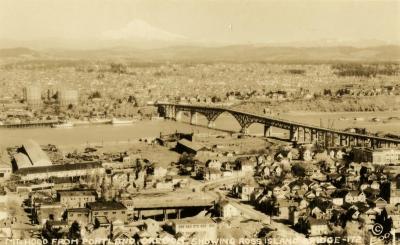