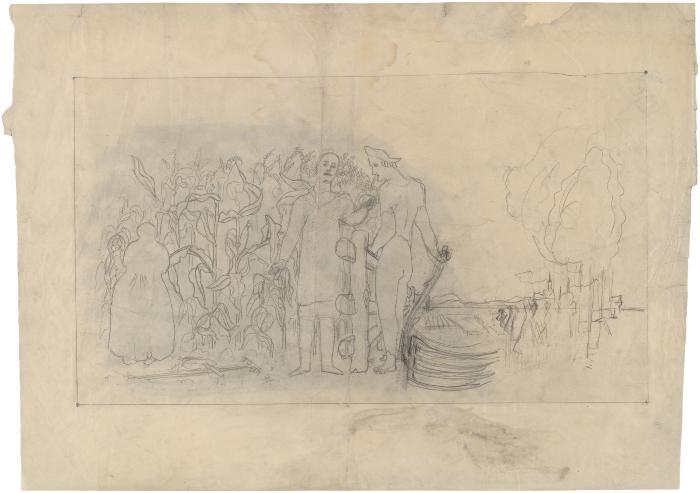 A competition for murals and sculpture for the main corridor, auditorium, and lobby of the Social Security Administration Building in Washington, DC, built in 1939, was announced in March 1940 [“Offers $79,420 in Art Prizes,” New York Times, March 25, 1940, 12]. Rothko and his wife Edith submitted proposals, Rothko for murals and Edith for sculpture. A series of sketches—possibly paint on board or panel—that Rothko made, now lost, is documented in a photograph in the National Archives, Washington (fig. 1). Rothko took Benjamin Franklin as the subject of his mural cycle: the title on the central sketch reads “Life of Benjamin Franklin—His efforts for the interests of the union above those of any state.”

The current drawing relates to the sketch at the lower right in the National Archives photograph and illustrates Franklin’s interest in agriculture. In 1743, Franklin purchased a 300-acre farm in New Jersey and was an advocate of indigenous crops, including corn, a field of which forms the backdrop of Rothko’s drawing. In October 1940 it was announced that Ben Shahn (1898–1969), Philip Guston (1913–1980), and Seymour Fogel (1911–1984) had been selected to execute their mural designs in the building’s main corridor, auditorium, and lobby respectively [“Wins Murals Contract: Ben Shahn to Execute Social Security Building Paintings,” New York Times, October 31, 1940, 20] 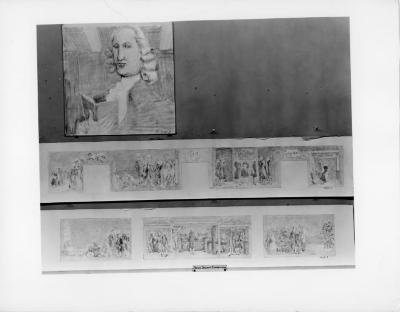