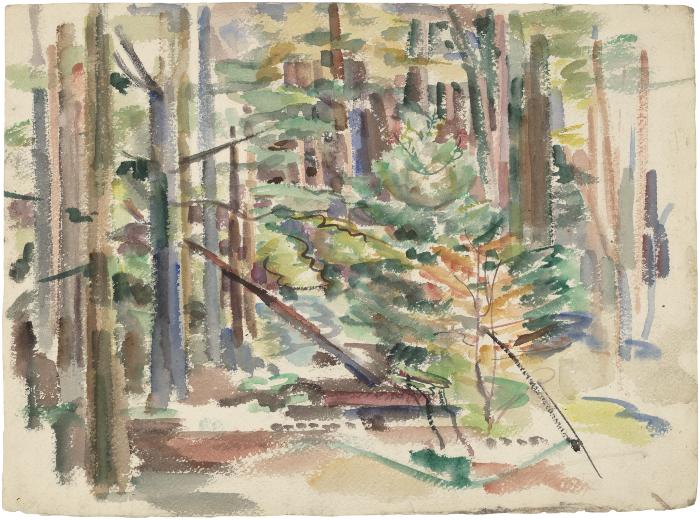 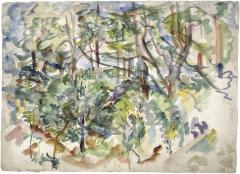 During the summer of 1933 Rothko and Edith Sachar (1912–1981), who married in November 1932, hitchhiked from New York to Portland, Oregon, to visit Rothko’s mother [Maurice Roth, oral history interview, September 15, 1984, Archives of American Art, Smithsonian Institution, Washington, DC]. They camped in Forest Park, in the Tualatin Mountains west of downtown Portland, where Rothko produced numerous watercolors, including, most likely, this study. In July 1933, the Museum of Art in Portland organized an exhibition of Rothko’s work. A critic noted, “The water colors are chiefly landscapes and studies of forests in which the artist has sought to retain the effect of complexity one finds in the out-of-doors and to show its ultimate order and beauty. A hint of his admiration for Cézanne is in these water colors. They are carefully thought out and in no way theatrical or dramatic” [Catherine Jones, “Noted One-Man Show / Artist One-Time Portland Resident,” Sunday Oregonian, July 30, 1933]. This watercolor is not signed and shows no evidence of having been matted or framed, so it is unlikely that it was in the 1933 Portland exhibition. It is, however, representative of works that Rothko did in Portland that summer (see Related Works on Paper).